This code/post was written in conjunction with Michael Capizzi. Sections of the original code on which this is based were written with Joe Meyer.

You can get the code and data discussed in this post (as well as presentation slides from the Tucson Data Science Meetup) by cloning the following repo:

Once you have the code and data, you can run a training session and get some output with the following:

This tutorial is meant for those who want to get to know the Flow of TensorFlow. Ideally, you already know some of the Tensor of TensorFlow. That is, in this tutorial we aren’t going to go deep into any of the linear algebra, calculus, and statistics which are used in machine learning.

Don’t worry though, if you don’t have that background you should still be able to follow this tutorial. If you’re interested in learning more about the math, there’s a ton of good places to get an introduction to the algorithms used in machine learning. This tutorial from Stanford University about artificial neural nets is especially good. We’re going to be using a simple logistic regression classifier here, but many of the concepts are the same.

To ground this tutorial in some real-world application, we decided to use a common beginner problem from Natural Language Processing (NLP): email classification. The idea is simple - given an email you’ve never seen before, determine whether or not that email is Spam or not (aka Ham).

For us humans, this is a pretty easy thing to do. If you open an email and see the words “Nigerian prince” or “weight-loss magic”, you don’t need to read the rest of the email because you already know it’s Spam.

Sadly, this simple approach doesn’t work well in practice. There’s lots of Spam words you will miss, and some of the Spam words in your list will also occur in regular, Ham emails. Not only will this approach work poorly, it will take you a long time to compose a good list of Spam words by hand. So, why don’t we do something a little smarter by using machine learning? Instead of telling the program which words we think are important, let’s let the program learn which words are actually important.

To tackle this problem, we start with a collection of sample emails (i.e. a text corpus). In this corpus, each email has already been labeled as Spam or Ham. Since we are making use of these labels in the training phase, this is a supervised learning task. This is called supervised learning because we are (in a sense) supervising the program as it learns what Spam emails look like and what Ham email look like.

On to the Script

Next, we have some code for importing the data for our Spam and Ham emails. For the sake of this tutorial, we have pre-processed the emails to be in an easy to work with format.

The X-matrices (i.e. feature matrices) have the shape (number of rows, number of columns). Each row represents an email, and each column represents a word. Each cell in the matrix contains an interger between 0 and infinity (i.e. \(\mathbb{N}\)) which is the count of how many times a given word occured in a given email.

Similarly, we have a matrix which holds the labels for the our data. In this case, the matrix has two columns, one for Spam and one for Ham. There can only be a 1 or a 0 in each cell, where 1 means that column is the correct label for the email. Like in the feature matrix, each row in the matrix represents an email.

In these illustrations the matrices have row and column headers, but the actual matrices we feed into TensorFlow have none.

You need to have either the “data/” directory or the tarred file “data.tar.gz” in your working directory for the script to work.

Next we have a block of code for defining our TensorFlow placeholders. These placeholders will hold our email data (both the features and label matrices), and help pass them along to different parts of the algorithm. You can think of placeholders as empty shells (i.e. empty tensors) into which we insert our data. As such, when we define the placeholders we need to give them shapes which correspond to the shape of our data.

The way TensorFlow allows us to insert data into these placeholders is by “feeding” the placeholders the data via a “feed_dict”. You if you do a CTRL+F search for “feed” you will see that this happening in the actual training step.

This is a nice feature of TensorFlow because we can create an algorithm which accepts data and knows something about the shape of the data while still being agnostic about the amount of data going in. This means that when we insert “batches” of data in training, we can easily adjust how many examples we train on in a single step without changing the entire algorithm.

This is essential for any optimization algorithm to work (we will use gradient descent). These variables are the objects which define the structure of our regression model, and we can save them after they’ve been trained so we can reuse them later.

Variables, like all data in TensorFlow, are represented as tensors. However, unlike our placeholders above which are essentially empty shells waiting to be fed data, TensorFlow variables need to be initialized with values.

That’s why in the code below which initializes the variables, we use tf.random_normal to sample from a normal distribution to fill a tensor of shape “shape” with random values. Both our weights and bias term are initialized randomly and updated during training.

Now we will switch gears to define the computations which will act upon those tensors. In TensorFlow terms, these computations are called operations (or “ops” for short). These ops will be the nodes in our computational graph. Ops take tensors as input and give back tensors as output. 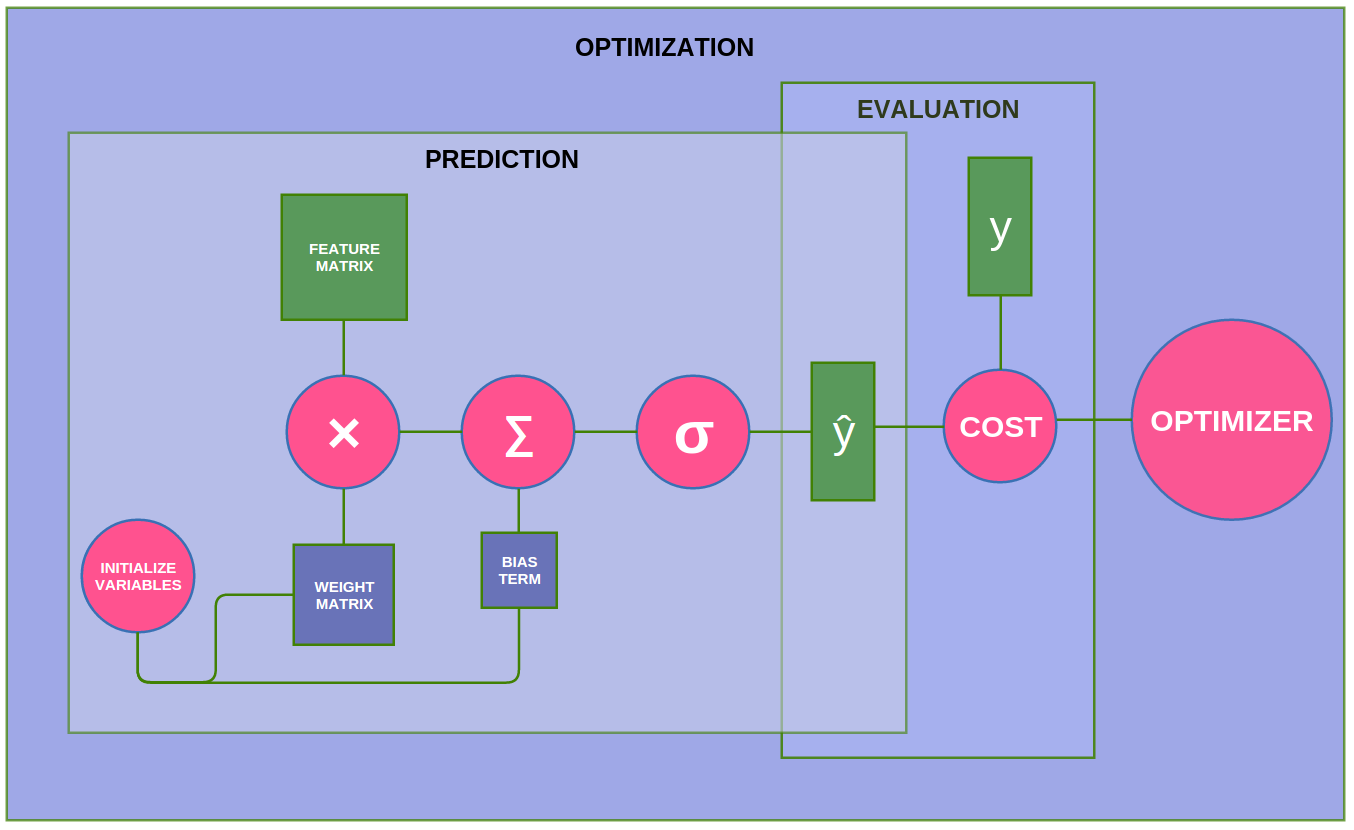 We will start with the operations involved in the prediction phase (i.e. the logistic regression itself). First, we need to initialize our weights and biases with random values via a TensorFlow Op. TensorFlow has a special built in Op for just this, since this is a step you will most likely have to perform everytime you use TensorFlow. Like all our other Ops, this Initialization Op will become a node in our computational graph, and when we put the graph into a session, then the Op will run and create the variables.

Next, we have our ops which define the logistic regression function. Logisitic regression is typically thought of as a single equation, (i.e. \(\mathbf{\hat{y}} = sig(\mathbf{WX} + \mathbf{b})\)), but for the sake of clarity we have broken it into its three main components (1) a weight times features operation, (2) a summation of the weighted features and a bias term, and (3) the application of a sigmoid function. As such, you will find these components defined as three separate ops below.

Next, we define the function to optimize our cost function. We are using gradient descent, which TensorFlow has a built in op for.

The following code block is not central to TensorFlow, but we wanted to include a graph of our training progress which updates in real time.

Now that we’ve done all of the important definitions of our tensors and ops, we need to send them to some hardware to run them. This is where the TensorFlow Session comes in handy. In the words of the official documentation:

To compute anything, a graph must be launched in a Session. A Session places the graph ops onto Devices, such as CPUs or GPUs, and provides methods to execute them.

Now, lets create a TensorFlow session and do some training!

Now that we have a trained logistic regression model for email classification, let’s save it (i.e. save the weights and biases) so that we can use it again.

Using Tensorboard with this data: